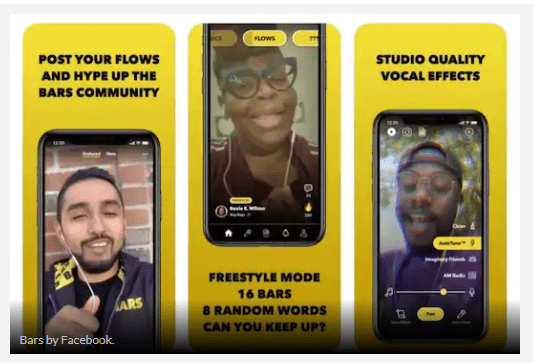 Facebookās new launched app – BARS app was created by Facebookās internal R&D group. It is designed to allow rappers to select from professionally created beats, and they can create and share their own raps and videos. This app is not only limited to creating rap music and creating videos but, it also allows you to have autotunes and will help you when you will write rhymes.

This Social media platform was able to launch their first musical entertainment app before and now, rap app is launched with a promising outcome to compete with TikTok app. BARS is now available in the iOS App Store in the U.S., with Facebook gradually admitting users off a waitlist.

BARS app is aims to facilitate at to-be rappers who are looking to create and share their own videos. The app will allow users to select from hundreds of professionally created beats, then they will have to write their own lyrics and finally record a video. BARS offers many automated features one of them is that it can automatically suggest rhymes as youāre writing out lyrics. This app also offers different audio and visual filters to accompany videos as well as an autotune feature.

Thereās also a āChallenge modeā in which you can freestyle with auto-suggested word cues, which is one the new features and has user-friendly interface. As mentioned, it will also offer beats for usersā own recordings.

The videos can be up to 60 seconds in length and can then be saved to your Camera Roll or shared out on other social media platforms.

The pandemic has played a vital role in BARSā creation. According to NPE Team, the pandemic shut down access to live music and places where rappers could experiment.

āI know access to high-priced recording studios and production equipment can be limited for aspiring rappers. On top of that, the global pandemic shut down live performances where we often create and share our work,ā further said by one of the team members of NPE.

BARS app was built with collaboration of a team of aspiring rappers, and today launched it! It is available on app store in United States for now and will be available for the rest of the countries very soon. Do I think itās a good thing or not? Well, considering the dynamics of Social media marketing and the impact of TikTok and social media itself, for aspiring rappers its one of a good opportunity readily available for them so, congrats to them!