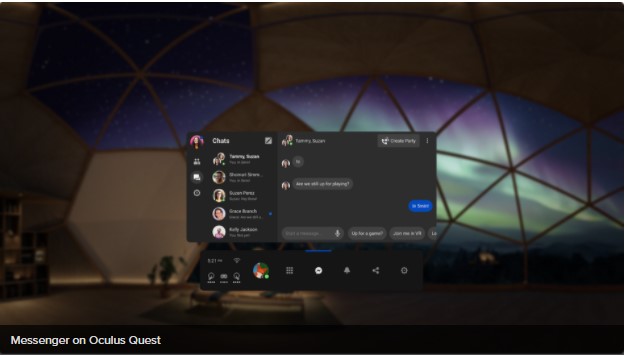 Great news to those who were finding ways to keep up with the family group chat while playing Beat Saber. Well, Guess what? This day has finally come.

According to Oculus Quest developer‚Äôs latest update, VR company that is owned by Facebook announced that Facebook in this week Messenger will start rolling out to Quest headsets. Now you’ll be able to chat by simply typing in VR, using voice-to-text, or by inserting generic auto-filled statements into the conversation.

A plus point of this update is that Messenger on Quest doesn’t segregate users based on device.  Multiple VR Users that want to communicate with each other can create an Oculus party from within Messenger to group up in any multiplayer game they feel like playing together.

The whole chatting mechanism can is now much easier. Users can type their message in virtual reality and can also send pre-written messages. Company‚Äôs developers also have a new way to distribute VR apps and games.

According to the Oculus sources, chatting with Messenger friends through your headset won‚Äôt affect your Oculus privacy settings. You’ll still be able to use Oculus Chats to message friends with your own Oculus username.

Software update v25, which is starting to roll out also introduces a feature called App Lab. It is going to enable developers to distribute their apps and games outside of the Oculus Store. Facebook also suggests that his feature will allow users to have high quality within the store and will also provide secure environment to the developers.

Even though these apps may not be in the Oculus Store, you will still be able to search them if you know the exact name and it will pop up in the App Lab section of the results.

However, integrating Messenger with Oculus Quest headsets is yet another excuse to spend as much time in VR as possible. But it is something that we certainly understand especially during these trying times.

Don‚Äôt forget to take breaks every now and then. That Messenger chat with your friend can¬Ýwait.¬Ý